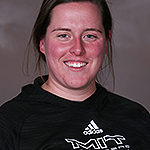 Anne started paying lacrosse as a 7th grader in Franklin MA. At Franklin High School, she was a 3-year member of the varsity team and a two-year starting goalie. She was a two-year captain and All-Hockomock player. As a senior she was named the Hockomock League MVP, and a Boston Globe All-Scholastic, as Franklin reached the south sectional semi-final for the first time in program history.

After high school, Anne moved on to play goalie at Springfield College. A four-year starter and two-year captain, she contributed to Springfield’s 2012 and 2013 NEWMAC championships, and helped the team advance to the NCAA tournament. As a sophomore and junior she was selected to the NEWMAC All-Conference 2nd team and All-Academic teams. As a junior, she was selected as the NEWMAC Tournament Most Outstanding Player. In her senior year, Anne was named the NEWMAC Women’s Lacrosse Player of the Year. Anne graduated in 2014 with a degree in Physical Education and a minor in Health.

Anne was an assistant coach at Endicott College from 2014-2016. In her two seasons, the Gulls advanced to The CCC Tournament, including reaching the league finals in 2016. Anne also coached 12 All-Conference players, six IWLCA All-Region selections, one ECAC New England All-Star, and one conference Defender of the Year.

Anne has continued to help MIT play at a high level both as a team and on an individual basis. She led her squad to the NEWMAC semi-finals in both the 2018 and 2019 seasons. In 2018, senior Emily Young became the first player in the history of the MIT women’s lacrosse program to be named NEWMAC Athlete of the Year, while classmate Katie Notarangelo received the team’s first Co-Defensive Athlete of the Year accolade. In 2019, Eva Then was named the NEWMAC Rookie of the Year.