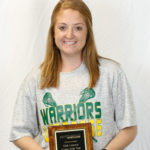 Kourtnie Wilder, a native of Framingham MA, played varsity field hockey, ice hockey and lacrosse for the Flyers. In 2010, she helped lead the lacrosse team to a state championship title (along with fellow Gold Star coaches Tanner, Rachel and Kara). She was also named a Bay State League All-Star in field hockey and ice hockey her senior year. Kourtnie was then recruited to play lacrosse at Assumption College, where she excelled on and off the field. On the field, she posted a total of 45 starts on defense, 37 ground balls, 6 draw controls and 16 caused turnovers. In the classroom, she was a 2 x Student-Athlete Honor Roll member. She also earned the Spring 2015 Assumption College Premier Student-Athlete Award for a perfect 4.0 GPA during her senior year. Kourtnie graduated in 2015 with a degree in Biology (with a concentration in secondary education).

Kourtnie currently teaches science at King Phillip Regional High School where she is also the head coach of the varsity girls lacrosse team. For her inaugural season in 2018, she was named the Hockomocksports.com girls lacrosse coach of the year after leading the Warriors to a second-place finish in the Kelley-Rex division and to the Div. 1 East quarterfinal.