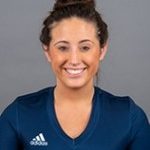 Kristin Wilder is a 2015 graduate of Framingham High School, where she played four years of lacrosse, field hockey and ice hockey for the Flyers. She was a three-time Bay State First Team All-Star as well as an All-scholastic selection her senior year.

Kristin went on to play attack at SNHU, where she set numerous school records. As a freshman, she started all 18 games, and amassed 76 goals & 9 assists for 85 points. The 76 goals are the most goals ever by a Penmen in a single season, while the 85 points are the most for an SNHU freshman in a single campaign. After her freshman year, she was named an IWLCA All-America Second Team, IWLCA North All-Region Second Team and Northeast-10 Rookie of the Year. Kristin’s dominance continued for four year at SNHU and she ended her career with four All-NE10 selections, and is first all-time in school history with 247 goals and 290 points.

Kristin majored in sociology with a minor in education. She is the sister of Kourtnie and Kaitlyn – both Gold Star coaches!