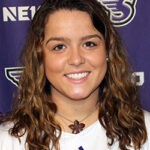 Kenzie Pleshaw attended Franklin High School where she was a four-year varsity starter in both lacrosse and field hockey. She was a lacrosse captain for her junior and senior year, and helped lead the Panthers to four undefeated Hockomock league titles, and two East Sectional championships. Kenzie was a two-time Hockomock League all-star, earning league MVP honors as a senior. As a senior she also earned All-America honors and was a Boston Globe and Boston Herald All-Scholastic selection.

Kenzie went on to play at Stonehill College, where she also earned her degree in Marketing.